The ABA has little to do with the original American Basketball Association that played for nine seasons from 1967-1976 aside from the titular red, white, and blue ball.

The ABA season usually starts around November 15, and ends around March 10, with two weeks of the playoffs proceeding it. An ABA season consists of 36 games.

The National Basketball Association, which owned the name ABA, initially sued the league over use of the name, but dropped the suit after Newman and Tinkham licensed the name from the league. Since then the NBA has not taken any legal action against the league.

ABA games are broadcasted on rare occasions by the Urban Broadcasting Company.

The official motto of the American Basketball Association is, "More than just a game."

The league's official website can be seen here: http://www.abalive.com

The league's official YouTube channel can be seen here: http://m.youtube.com/#/user/ABALive2013?&desktop_uri=%2Fuser%2FABALive2013

The American Basketball Association was an idea thought-up by the league's current CEO, Joe Newman, and the league's director, Richard Tinkham, in mid-1999.

The ABA was heavily advertised as a rival and competitor of the NBA, and soon got press coverage from such sites as ESPN, the Los Angeles Times, and the Chicago Times. At the time, it was billed as a Continental Basketball Association, but in major cities like Chicago and Los Angeles.

The league's first CEO was Gerald Williams, but he was replaced by Joe Newman in the middle of the 2000-2001 season.

Before the league's opening tip-off in the fall of 2000, the ABA announced a merger with the one-year-old International Basketball League, with plans to create a 14-team league, while keeping the name ABA and still using the red, white, and blue ball. However, less than two weeks later, the merger was called-off, and both leagues continued separate operations.

The league postponed operations during the 2002-2003 season to reorganize its financial fee policy and to revise its focus. The league reduced its franchise fee from $50,000 to $10,000 and not requiring a bond to start a team, which made it easier for teams to get into the league that otherwise couldn't. However, it also meant that many franchises would be badly underfinanced, and resulted in many teams folding outright or not finishing the season.

The league would restart operations in the 2003-2004 season with seven teams instead of the intended eight.

More then a hundred teams joined the league during its first two seasons playing under the financial plan (2004-2005 and 2005-2006), which expanded the size of the seven-team league.

However, of the more than 100 teams that entered the ABA, most of them folded during their first season, while many of the league's regular season games were never played.

In addition to the franchise fee raise, the league elected Tom Doyle, former owner of the Maryland Nighthawks ABA franchise, as the COO.

The season also saw the league face an uproar of controversy over the season, particularly during the playoffs. The problem arose when league CEO Joe Newman refused to allow play of a postponed playoff game between the Rochester Razorsharks and the Wilmington Sea Dawgs, even though the teams agreed to make-up a date. His intention was to force Rochester to accept a forfeit. This resulted in Rochester, then the league's defending champions, leaving the ABA to form the Premier Basketball League. After the playoffs, however, eight other teams left the league for the PBL, citing that the league's handling of its operations resulted in it being too unstable.

To make things more unnerving, the ABA's Board of Directors, which included newly-elected COO Tom Doyle, attempted to fire Newman from his position as the league's CEO while amidst the controversy. Newman denied this ever happening, and the matter went all the way to the courts. Newman not only kept his position as league CEO, but also fired the entire Board of Directors, including Doyle.

Doyle, when asked about the situation, replied,

"My idea of success and Newman's differ . . . I'd rather have fewer teams, that are stable and last, as opposed to having tonnes that continue to fold. It's not the amount of teams that a league has, it's the amount that finish."

Newman, when asked about the situation, responded,

"How stupid are they? I own the league and so I fired them."

The 2007-2008 season wasn't any better, as many of the season's games were never being played. In fact, it had been reported (via OurSports Central) that only 38% of games were actually being played.

The inability to provide teams that could handle its own finances and show-up for road games resulted in many sports representatives in the media referring to the league as a joke. As a result, the league has limited media coverage and is often overlooked by the general public.

One reporter for the local newspaper the Indiana Star wrote,

"The league is a joke, a pure joke, and the lowest league in North America where people get paid to play sports. We stopped covering them early in their existence. We didn't have a clue when or where they were playing. God pity Halifax if you get involved with this group."

Anybody who doesn't think ABA 2000, which is to blame for creating the Las Vegas Slam and forcing it upon local fans during mid-season, is on life support need only check the small print on the bottom of Saturday night's Slam-Phoenix Eclipse box score.

Following "Location" was Phoenix Baptist Church; following "ATT" (for attendance) were just three numbers -- 433. And in the line above that, under the first-quarter score, it read: Phoenix 37, Las Vegas 8.

Unless one of the game's no-name participants decided to get baptized or pass the collection plate at halftime, I'd say it was pretty much a wasted evening.

Las Vegas, of course, lost, but the score is irrelevant. It won't be back next year and neither will the league.

The ABA, originally formed in 1967 in direct competition with the NBA, was a radical and experimental league for its time, sadly the latest incrantion for the league originally titled the ABA2000 has also been unique however for all of the wrong reasons, and to the overall detriment of minor league basketball in North America.

One of the few highs of the 2007-2008 season was the fact that a Chinese team, the Beijing Aoshen Olympics , joined the ABA, becoming the first Chinese team to do so.

The 2008-2009 season saw the league, then short on teams, conduct interleague play with the rival Continental Basketball Association.

The 2009-2010 season was scheduled to have over fifty teams. Again, by the end of the season, several teams folded, including the entire Northwest division. The league was also forced to cancel a large amount of games, including a semi-finals bout, due to many teams not being able to afford traveling costs.

On April 25, 2010, as part of their ABA Global initiative (Newman's move to globalize the ABA), the league hosted the 2010 ABA Friendship Games, where the Phillipine National Basketball Team played against teams from the league.

The 2010-2011 season intended to have over sixty teams to participate in the season, but once again, many teams folded before, during, and after the season, including the league's planned Canadian teams and its Haitian team. The league also planned to introduce the Women's American Basketball Association (WABA), which was a women's professional basketball league that played for one season from 2001-2002, but later planned to re-launch it in 2014.

The 2011-2012 season started with ninety teams expected to play in the season. This time, however, the league had much better luck keeping most of its teams, as only seven teams folded/left/were moved to expansion teams for next year. The 2012-2013 season saw the league field over sixty teams in the United States and Canada, and has expanded to eighty seven.

In 2013, the ABA announced the formation of an ABA summer league.

The franchise fee to buy a franchise (or "reserve a market") in the ABA currently stands at $10,000, which allows many people and organizations to enter the league that otherwise couldn't. However, this also resulted in many teams being badly underfinanced, with many franchises folding outright, suspending operations, or never finishing the season.

There has been some criticism hovering around the fact that most players are not paid salaries for playing a game. Other complaints center around the fact that some ABA teams borrow money from its players to fund a road trip, but don't refund it in the event that the game is cancelled.

Notable cases include the Indiana Legends, owned by the league CEO Joe Newman himself (players from the Legends sued Newman over nonpayment of player salaries after the team folded after only two seasons in the league), and the Chicago Steam, who were sued by its players for taking their money to fund a number of road trips, and not giving it back when said trips were cancelled.

Tickets, for the most part, are inexpensive, usually costing about $10-$30 a piece, depending on the game's importance and the teams playing. Occasionally, however, no ticket counters are present during an ABA game, making the game free.

Most fans of the ABA say the price of the tickets makes it easier for them to afford to see their favorite teams, and ticket sales tend to increase greatly during the ABA Final Four tournament.

Along with reviving the old name of the ABA, the league yet again introduced more rules that changed the game. The most prominent of the rule changes include:

The American Basketball Association is sponsored by a variety of different companies. These include: 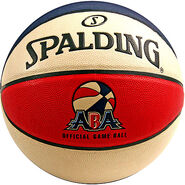 The ABA - More then just a game.

A piece of ABA action.
Community content is available under CC-BY-SA unless otherwise noted.
Advertisement